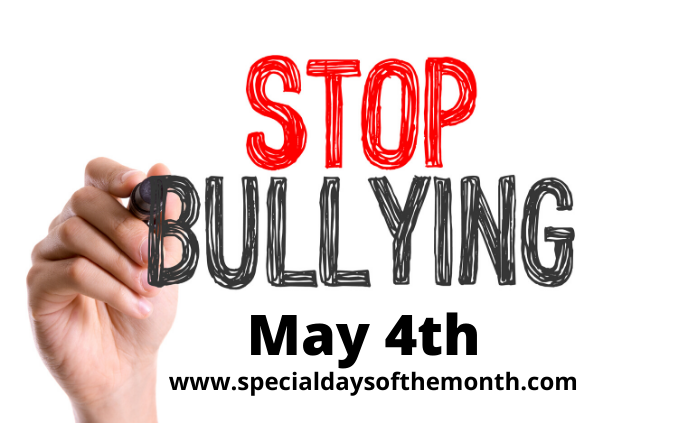 What is Anti-Bullying Day?

Anti-Bullying Day is an official day to stand up to bullying. While the day was first created in Canada, it is now celebrated around the world. In 2012 the United Nations made it an official holiday. Anti-Bullying Day is a special semi-annual event to help prevent bullying.  The awareness of bullying has increased as the use of social media has taken off over the last 10 years.  In 2007, male ninth grade student Chuck McNeill, from Canada, was bullied for wearing a pink shirt during the first day of school, the following year the day became an official holiday in Canada. On May 4th, if you aren’t celebrating Star Wars Day, then wear pink to show you stand up against bullying.

There are two days in the year this day of awareness takes place. It takes place around the globe on the third Friday of November to coincide with the Anti-bullying week, and then again on the last Friday of February.

When is International Anti-Bullying Day?

May 4th. Celebrated the same day every year.

Official holiday. A day of awareness.

How is Anti-Bullying Day Celebrated?

Social Media Hashtags for this day:

Celebrities who celebrate their birthday on May 4th :

May 4th is a busy day for holidays with Star Wars Day and International Space Day also taking place.

Other holidays in May to be on the lookout for include: National Missing Children’s Day, National Water a Flower Day and National Nurses Day.