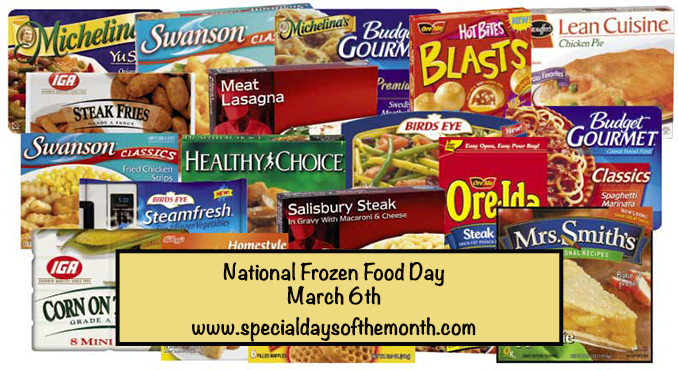 It’s hard to believe this day was created by a former President of the United States. Thanks to Ronald Reagan frozen food has its very own day on the calendar. Reagan and his wife, Nancy loved sitting in front of the television and eating frozen food. Freezing food preserves food from the time it is prepared to the time it is eaten. Since early times, farmers, fishermen, and trappers have preserved their game in unheated buildings during the winter season. Freezing food slows down decomposition by turning water to ice, making it unavailable for most bacterial growth.

When is National Frozen Food Day?

Treat yourself to new things on this “chilly” frozen food day. Plan an entire day’s worth of meals by only using frozen food items. Place fruit in the freezer, such as grapes and bananas, which are also excellent snacks for kids. Toaster strudels are a quick breakfast on the go. Slip a hot pocket in a microwave or eat a “Lean Cuisine” meal. Explore the world of frozen dinners. Finish off this special day with ice cream or another frozen favorite food. Delicious treats include pies, ice cream cakes, or sorbet.

Celebrities who celebrate their birthday on March 6th:

Another holiday, though not nearly as popular that is celebrated on March 6th is National Dentist’s Day.