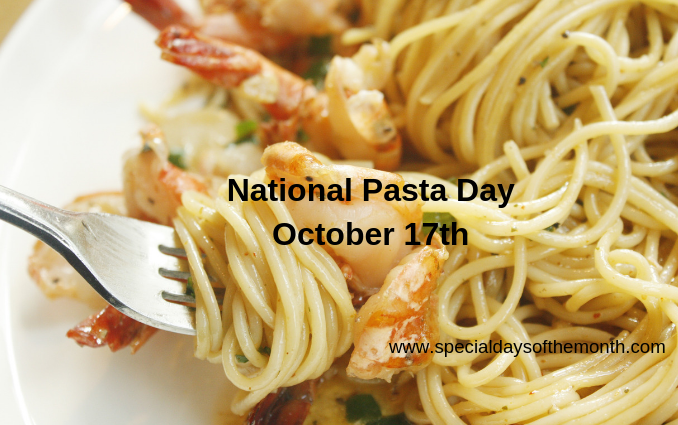 Pasta is one of the world’s most favorite foods! With more than 600 known pasta shapes – there are so many meals that can be made with pasta. From spaghetti, lasagna, rotini, to tortellini – a meal with pasta is definitely a must! Not only are there a number of choices as to what type of pasta you want, but you will also find it’s delicious and nutritious too. Pasta is the Italian word for dough. It can be enjoyed as a main course, or as a side dish. Top it with your favorite sauce or eat it plain or with butter and you are good to go.

Pasta was introduced in the United States by Thomas Jefferson, who fell in love with it after tasting it in Naples, Italy. He love it so much he brought back the first pasta maker to the U.S.

When is National Pasta Day?

How to Celebrate National Pasta Day:

Celebrities who celebrate their birthdays on October 17th:

Hashtags to use for National Pasta Day:

Some pasta recipes are so delicious they even have their very own day. Check out National Fettuccine Alfredo Day, celebrated in February. Other holidays to celebrate in October include National Pasta Day, National Sweetest Day, National Coming Out Day and many more!