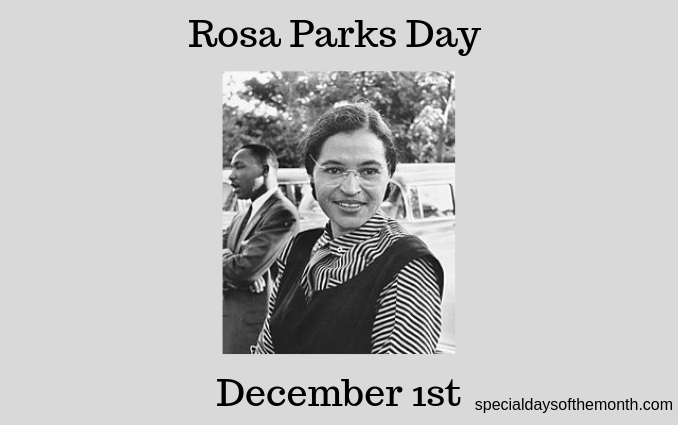 Rosa Parks Day is a day set aside to celebrate Civil Rights Leader Rosa Parks. An American holiday, celebrated on December 1st with the exception of California and Missouri, where it is celebrated on Park’s birthday, February 4. December 1st is the day that Parks was arrested for refusing to give up her bus seat for a white passenger. Parks was arrested when the bus driver called the police. Many people boycotted the Montgomery Bus System for more than a year because of this incident. Rosa Parks Day promotes equal opportunities, civil rights, and fairness across communities in the U.S.

When is Rosa Parks Day?

Celebrities who celebrate their birthday on December 1st:

Other holidays celebrated on December 1st include World Aids Day and National Eat a Red Apple Day. Do you celebrate any of these holidays or Rosa Parks Day on December 1st? Leave a comment and let us know.
Tweet
Pin
Share
0 Shares
2018-11-10
Previous Post: National Cookie Day – December 4th
Next Post: December Holidays